U.S. born children whose parents have been deported or voluntarily returned to their country of origin face an uncertain future.

Younger ones go into foster care. The older ones are often left to fend for themselves. In Tucson, some find their way to Youth on Their Own, which provides a support network.

Jose Chua is graduating from high school in June.

“I was born here in Tucson. Us triplets. Me and my brother and my sister.”

Jose is the spokesman for the family.

Mary, Jesus and Joseph. Jose said that with those holy names they could not fail.

For a while, things were good for the Chua family. Their parents, while not U.S. citizens, had visas and jobs in Tucson. Just a normal family, Jose said.

“It was all great, until we were 10 years old, when my father and my mother went to Mexico to visit other family. And when they came back, just my mom came back, not my dad. She told us that he lost his visa and that he reported it stolen and they couldn’t do nothing about it.”

Jose said his father tried at least three times to get a U.S. visa. He was denied without a reason. Eventually, the mother’s visa also expired and she too was unable to get it renewed.

The mother and father decided to keep the family together and move back to Mexico. It worked until high school. Because the triplets are U.S. citizens, high school was not free in Mexico. Only Mexican citizens can go to high school free.

“We tried to go to high school, but it’s like tuition. It was like here with college – over there with high school,” Jose said. ‘So for all three of us, it wasn’t going to work. So we decided to go to Tucson.” 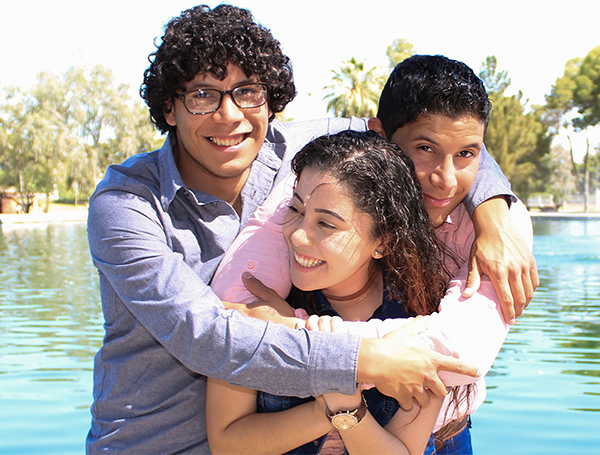 KVOA – Youth On Their Own takes in wealth of donations after break-in
Greater Tucson Leadership: Multipurpose space serving homeless youth to be unveiled
YOTO2017-09-30T20:41:36-07:00